Recently we had an interesting conversation with Ben, a very frustrated medical device sales representative. Ben has been a top 5% performer for his firm (Origin) in each of the last five years. He has exceeded quotas every year and consistently outsold his competitors. Origin competes against several companies that offer similar services. Further, Origin has continued to chip away at companies who have resisted outsourcing services in favor of an “in house” solution.  According to Ben, Origin provides a highly differentiated product and service and they have a dominant market position in a challenging market.

Ben explained that he received a qualified lead from the Inside Sales team at Origin early on the Wednesday before Thanksgiving. Mark Simons, the Director of Sales at Alpha Systems, had called and asked for a written proposal by Monday. Mark explained he had to present it along with pricing to his boss, Bill Hammond, the following day (Tuesday). Mark apologized for the short notice.

When Ben received the telephone request from Inside Sales to fulfill this request he immediately became suspect of the request, its timing and urgency. He knew that the proposal would require several hours of work over a holiday weekend. Given the short time frame, all he would be able to do was present (pitch) his product and services. In addition, Ben was concerned that Alpha Systems had already selected another supplier and all they wanted was a competitive proposal to fulfill an internal purchasing requirement of having two or more bids to validate their decision. If this was the case Ben would be wasting his time.

Ben decided to contact Mark to try and qualify the lead for himself. When Ben and Mark talked they had a good but brief conversation. Mark explained that he had just joined Alpha Systems a few months ago but had used Origin’s services in his prior company and was pleased with them. Further, he stated that he wanted to bring Origin into Alpha as soon as possible. Mark stated he had a budget to purchase Origin’s services but needed to present Origin and their pricing to his boss. Further, he did not know if his boss was aware of Origin or their services. With that information Ben agreed to get him a written proposal by Monday with one caveat. Mark must agree to another telephone call with Ben on Tuesday to provide feedback on how the meeting went with his boss.

Ben submitted the proposal late Sunday evening of the holiday weekend but never got the agreed upon follow-up call with Mark on Tuesday. Instead he received an e-mail saying that the meeting had been postponed. Over the next five weeks Ben tried repeatedly to schedule a telephone call with Mark to assess Mark and Bill’s reaction to the proposal. Mark kept accepting Ben’s Outlook invitations for a telephone call but would cancel at the last minute with an email that indicated, “I need another week.” After five weeks, Ben received an email from Mark explaining that they had selected another vendor.

With this as background Ben asked us what he should have done better or differently? 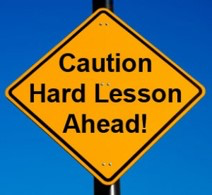 We began by thanking Ben for the background information and explaining to him that we have both been in a similar situation and experienced a similar outcome. We then asked Ben the following questions:

“As I reflect back, I lost this sale because I didn’t do two things. First, I should have asked all of the questions of Mark that you just asked me and I should have done it during our first telephone call. I so concerned with the timing of the request that I missed the opportunity for discovery?”

“Second, before I put a proposal together I should have requested/required a conversation with Bill Hammond, Mark’s boss. This would have allowed me to assess his receptivity to change and the underlying needs driving the decision process.  At best my proposal was guess work.”

Ben thanked us for our time and told us he now understood when and why he had lost the opportunity for the sale. We encouraged him to conduct an in depth “lose analysis” with Mark.

Ben was correct to be concerned with an urgent request for a proposal right before the holidays. We have rarely seen this type of request benefit the seller. The opportunity to win this sale, however, was lost because of an inadequate discovery process. Ben got lulled into a sense of comfort when Mark told him he loved his company and their services and wanted to give him the business. Ben forgot that Mark had a boss who had the final voice in the matter.  Bill Hammond had no knowledge of Ben or Origin’s capabilities.

Ben didn’t understand that by asking for a proposal, Mark’s organization was well down the buying process pathway. This is an easy mistake to make and an important lesson for all of us:  asking good insightful questions early in the buying process is key to success. Awards usually favor whoever performs the best discovery work.

As always we welcome your thoughts and input. Let’s start a discussion and elevate the sales profession with a thoughtful, civil and informative discourse.